In India Getting a government is a dream for each and every Indian. Now a day’s most of the young graduates are trying to get a Government Job. With this article we are just trying to aware you regarding government jobs in India. There are a large number of Government services are going to release the recruitment notification. A recent survey by our team in India discovers there are millions of Government Jobs vacancies available in India, but we have to wait for the notifications.

Why a Government Job In India? 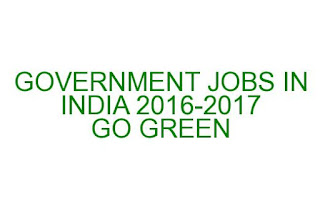 While comparing with all the other jobs in the private sectors, government job is more secure than them. In past year’s salary in the government sector is very low, but now they are offering more salary than private companies. Everyone knows if you have a government job, then you are the king in the home or village. A government job will give boost to your family. And it will give a great name in society or public if you perform well.

Types of Government jobs in India:

There are two types of Government jobs available in India. One is Central government jobs any one can apply in India. Like Indian Railways, Indian Army, India Air Force, Indian Navy, India Post, BSF, CRPF, Food Corporation of India, UPSC, SSC, Media, Manufacturing, Production, Human Resources, Banking sector who are undertaken by the Indian government and Engineering Jobs etc. And every department has their own Human resources team to recruit. And another one is State government Jobs where the particular state persons only can apply. Such as State Police, Educational Department, Agriculture, Finance and each and every state having their own State Public Service Commissions.
How can we get a Government Job India?
We cannot say it is easy to get a government job in India. Recruitments will be based on available vacancies. Whenever recruitment notification released you have to apply for the same while knowing qualification, age and whether you are suitable for the job on not. Most probably all the government recruitment agencies will conduct a written test and followed by Interview. At the final screening there is a Medical test which is nominal.
What is the common syllabus of all Government Jobs?
There is a variation for each and every exam based on their industry or service. But commonly most of the syllabus is Current Affairs, Reasoning, Quantitative aptitude and basic computer Knowledge.
Where I can get the Government jobs notification in India:
Getting a Job is may be difficult, but not finding a job. Here you can get job vacancy information on your finger tips. And some sources for your knowledge.
a.       Employment News
b.      News Papers
c.       Online Job Portals
What the biggest government Organizations in India providing Government Job?
Yes, some are
a.       Indian Railways
b.      Indian Army
c.       India Post
d.      State Bank of India
Can we get a job with a qualification of 10th and 12th 2016-2017:
Due to several reasons so many are unable to continue their studies after 10th and 12th. These are very crucial time to begin your career. No need to worry, there many jobs after 10th and 12th available in India. Surely you will get in the Indian Army, Indian Railways, India post, Indian Navy, Forest Department, CRPF, BSF, State government, police jobs, Transport corporations of each state, clerk jobs in Banks, State wise public service commission’s and SSC (Staff Selection Committee) etc.
How much Salary we can get in Government Sector:
Most of the Government jobs will start with the salary of Rs.10000/- and average maximum salary will be 60000/- per month.
Is there Jobs available for Engineering Graduates in India:
Yes, there are plenty of jobs available for young engineering graduates. They can get jobs in Indian Railways, Indian Army, Indian Air Force, IES, All petroleum corporations (like ONGC, IOC, BPCL), BHEL, ISRO etc. offering jobs in India. Hope this article will be useful for you. Please don’t hesitate to contact with us. We are just a mile away to you. We are always here to help you. Please share this topic with your friends through Facebook, Google plus, and twitter. So, they should be happy with you if our article helps him.
FacebookTweetPin