UPTET admit card 2018: Uttar Pradesh Teacher Eligibility Test TET 2018 admit card has been issued. Admit cards can be downloaded from the UPTET website of upbasiceduboard.gov.in. The call letter was to be issued on Tuesday but there was a delay of one day and it is released on Wednesday evening. Nou you can download the Admit Card /Hall Ticket from the website of UPTET upbasiceduboard.gov.in.
For this UPTET Admit Card, lakhs of candidates were waiting from many days, but the center allotment for 17.80 lakh candidates is tuff task for UPTET authorities. So it is delayed for few days. However, the list of applications forms of repealed 44135 candidates has been uploaded with reason. This time the department is preparing to stop any kind of misconduct in the examination like paper leakage etc. To sit in the exam, we have to take a valid document along with UPTET admit card.

Documents to be taken along with Admit Card for UPTET:
UP State Secretary Examination Regulatory Authority Anil Bhushan Chaturvedi said that with the admission letter at the examination center, it is compulsory for the candidate to bring the original identity copy of his / her photo identity card and certificate of qualification in the online application or the original copy of any semester’s marks sheet. Without it, the entry will not be allowed in the center. On 18-11-2018 from 10 am to 12.30 pm UPTET primary level exam and from 2.30 am to 5 pm UPTET higher primary level examination will be conducted.
Download Admit Card here
http://upbasiceduboard.gov.in/TET_AdmitCard/registered.aspx?a=g
Download Exam Key here
http://upbasiceduboard.gov.in 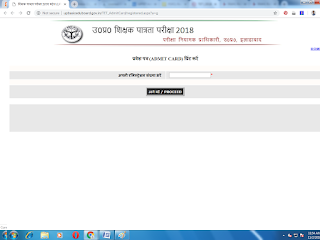