UPSC NDA and Naval Academy Exam Paper 2 Syllabus 2022: The Union Public Service commission of India conducts the NDA and NA examination to recruit the candidates in to officer’s academies of NDA and NA for Under Graduate Program. The examination for UPSC NDA and NA will held in three phases. Paper 1, Paper 2 and followed by an Interview which is conducted by Staff Selection Board. We already provided UPSC NDA and NA Exam 2022

Paper 1 syllabus on our govt job online portal. Here you will see the paper 2 syllabus of UPSC NDA and NA Exam 2022. 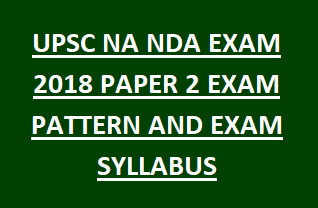 NOTE : Maximum marks are assigned to Part B and questions on
Sections ‘A’, ‘B’, ‘C’, ‘D’, ‘E’ and ‘F’ will hold approximately 25%, 15%, 10%,
20%, 20% and 10% weightages respectively.
This is all about the syllabus for Paper 2 of UPSC NDA and NA Exam. Please share this article with your beloved friends through social networking sites.
FacebookTweetPin