Eligible candidates download applications from official website of Sikkim PSC on or before 06- 01- 2017 by 03.00 PM. Selection for this Stenographer Jobs In Sikkim PSC Recruitment 2017 will be based on Written Test followed by interview. Other details like Educational qualifications, Vacancy details, Age limits, Pay Scale, Exam syllabus and pattern of Sikkim Public Service Commission SPSC Recruitment 2017 are given below. 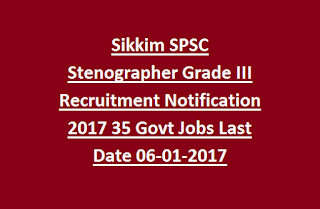 There are total 35 vacancies available in Sikkim PSC.
Name and No of Posts:
Stenographer Grade III: 35 posts.
For Category wise vacancies see the official advertisement of Sikkim PSC recruitment Notification.

Candidate must have completed Bachelor’s Degree from recognized University and Secretariat course for 2 years or Shorthand course for 1 year with at least 6 months basic computer course. Applicants should be able to type 30 words per minute and also have knowledge in Napali/ Bhutia/ Sikkimese/ Lepcha/ Limbo Languages.

Candidates should have minimum and maximum age limit of 18 years & 30 years as on 31 December 2016. The upper age limit of SC, ST and candidates belonging to Butia – Lepcha is 35 years, Other Back ward Classes (Central list) is 34 years and BC (State list) is 33 years.