Stenographer, Typist and Typist-Copyist Jobs. 33 vacancies are currently available in District Court recruitment of Chitradurga. Last Date for submission of application form in a prescribed format is 03-11-2018 by 05:00 Pm. Selection for these vacancies on basis of Written Exam, Skill/Typing/Computer Knowledge Test and personal interview. Complete information regarding Chitradurga District Court Recruitment for Stenographer and Process Server details are given below. 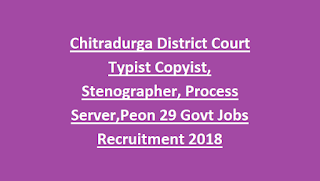 Selection for this Chitradurga District & Sessions Court jobs will be through skill test/type testing and personal interview.