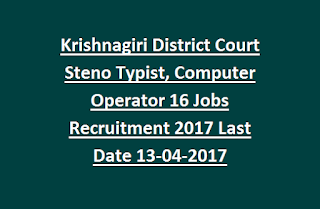 For Steno Typist Posts: Should have passed SSLC and Must have passed technical examination in Shorthand and typewriting in English and Tamil.

Should have passed junior Grade type writing in English and Tamil. Bachelors degree in Computer Science or Computer Applications or B.A /B.Sc /B.Com with Diploma in Computers.

How To Apply for Steno Typist, Computer Operator Jobs in Krishnagiri District Court:

Application form is available to download with official notification. Take a printout and fill all the details. Submit the filled application form along with Duly Self attested testimonials of Educational and technical skills, ID and Address Proof, Date of Birth proof, Community certificate and any other required documents. Application form to be reached to the below given address through post only on or before 13-04-2017 by 05:00 PM.
Address:
THE PRINCIPAL DISTRICT JUDGE,
COMBINED COURT BUILDING COMPLEX,
RAYAKOTTAI ROAD, KRISHNAGIRI – 635001
Download Notification and Application form for Computer Operator, Steno Typist Jobs in Krishnagiri District Court Recruitment 2017
FacebookTweetPin