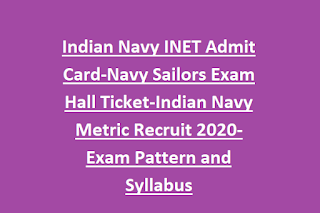 For Indian Navy MR Posts written test will be for 50 marks.  Exam duration is 30 minutes.
1. Mathematics & Science-25 Marks
2. General Knowledge-25 Marks
Note: For all the posts exam will be conducted in English and Hindi Language. There is a 0.25 negative marking for each wrong answer.
Download Exam here for Navy MR Exam 2021
https://www.joinindiannavy.gov.in/files/syllabus/syallabus_MR.pdf
Download MR Model Paper here
https://www.joinindiannavy.gov.in/files/files/MR.pdf

Candidates who are applied for the Indian Navy jobs they can download the admit cards through the official website of www.joinindiannavy.gov.in. To download admit card candidates must have enter mail id and password which is created at the time of online registration with Indian Navy. And also enter the text showed in image just below the password field and then click on login. Along with hall ticket candidates must have carry valid ID proof.
Download Admit Card here
FacebookTweetPin