UPSC NDA and NA Exam Pattern Syllabus 2022: Union Public Service Commission of India has been invited applications for the Graduate Level Program for NDA and NA officers from the citizens of India. The last date to apply online is 10-04-2022. This is the first phase of UPSC NDA and NA Examination. For the second phase notification will be released on July or August months.  There are 400 vacancies available which are 370 for National Defense Academy and 30 for Naval Academy. The exam will be conducted in two stages followed by a personal interview. Paper 1 examination for 300 marks with two and half hours time duration and Paper 2 exam will be for 600 marks with the same duration followed by a SSB interview for 900 marks total marks for UPSC NDA and NA Examination 2022 is 1800 marks. Based on all these marks final list will be generated. Here we will see the complete syllabus and pattern of UPSC NDA and NA examination.

Paper-I is purely based on Mathematics. Paper-I consist of 300 marks in UPSC NDA and NA Exam. 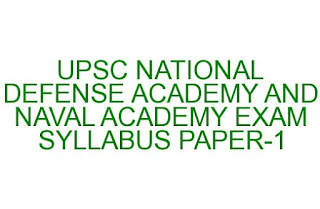 1. Algebra concepts for UPSC NDA and NA Exam in Paper I:

2. Matrices and Determinants concepts of Paper I NDA & NA Exam 2022:

Operations of Matrices, Types of Matrices, on matrices, basic properties of determinants, Determinant of a matrix, Adjoint, inverse of a square matrix, Cramer’s rule.

3. UPSC NDA and NA Exam 2022 in Paper I concepts of TRIGONOMETRY:

This is all about the Paper 1 exam syllabus for more details regarding information for Paper 2 and SSB interview please stay with us. We update latest notifications regularly in our govt job online portal. Please share this article to your friends through Google plus, Facebook and Twitter.
Facebook0Tweet0Pin0