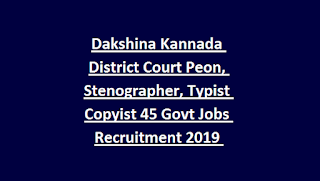 The candidate applying for Steno and other post should have a minimum of 18 years. The applied candidates should not exceed 35 years of age. The age limits should be as on the date of application.

The selected and appointed will get a fair monthly pay as described by the District Court of Udupi. The salary details are as follows:

How to Apply Offline for District Court  Peon Jobs of Dakshina Kannada:

The interested candidates can apply online for this Dakshina Kannada District Court official website. Last date to apply online is 25-05-2021.