Name of the posts and No. of vacancies available in HQ Eastern Command: 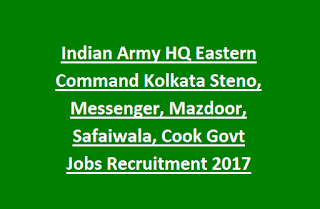 How to Apply for the posts in HQ Eastern Command Jobs:

The candidates should download the application form from the official notification and fill the details. The attested copies of age,educational qualification, residential address, caste and character along with 2 pass port size photographs. The application to be sent to the following address
The Administrative Officer,
HQ Eastern Command(Adm),
Pin-code-908542, c/o99 APO
For further information regarding the details of HQ Eastern Command, Indian Army jobs, Kolkata refer the official notification:
http://docs.karmasandhan.com/data/downloads/HQEasternCommand_Trades_Rectt.pdf