in Garhwa District Rural Development Department. Selection for these vacancies will be held through Merit in educational qualifications and previous work experience. Only limited candidates called to attend the interview. Based on academic qualifications and experience limited number of persons only receive the admit card or call for interview. For more details regarding Junior Engineer recruitment of Garhwa District Rural Development Department vacancy details are given below. 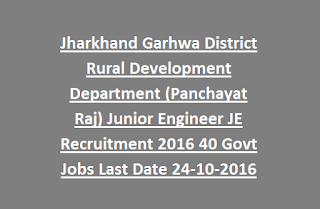 Upper age limit is 40 years and age relaxation will be applicable for the reserved candidates as per Jharkhand State Government Norms.

Candidate must have qualified Diploma in Civil Engineering from a recognized university with at least 60% of marks.
For SC/ST candidates 50% of marks required.
Preference will be given to the higher qualifications having candidates.

Selection for these vacancies will be held based on higher educational qualifications, marks percentage and previous work experience.

How to Apply for Junior Engineer Jobs in Garhwa Rural Development Department Recruitment:

Eligible candidates can download the application from the official website of Garhwa District @www.garhwa.gov.in. Filled application form along with all required documents, Bank DD to be send to the below given address.
Collectorate,
District Pancahcyat Raj Office,
Grahwa District.
For more details please refer official notification.