Mandal recruitment. Eligible candidates are requested to apply online on or before 16/07/2016 through online using official website of UP Seva Mandal @upsevamandal.org. This Cooperative Supervisors selection recruitment of UP SEVA MANDAL will be conducted in two stages. See the below given details of available vacancies, age limits, educational qualification, exam syllabus and application process for UP SEVA MANDAL Cooperative Supervisor (Sahkari Paryavekshak) recruitment examination notification. 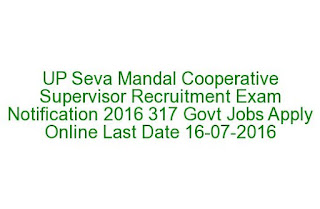 BSc Maths or BSc Agriculture or BA Economics or BCom qualifications required from a recognized university.
Preference will be given to the candidates who worked in any co operative society as an accountant.
DOEACC CCC certificate or any computer degree or diploma.

For General/OBC candidates application fee is Rs.500/- and for SC/ST/PH candidates Rs.200/-

How to apply for UP SEVA MANDAL Cooperative Supervisor (Sahkari Paryavekshak) Recruitment 2016:

The candidates have to apply online through the official website of www.upsevmandal.org only. Before applying read the user instructions and official notification. After completion of filling application online pay the application fees using SBI I collect with debit/credit card or using online banking. After submission of payment details only application will be accepted.