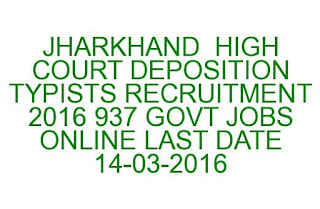 The selection for this Jharkhand High Court Recruitment will be based on typing skill test on computer in Hindi. Those who are cleared this they are only eligible for the interview.
will be prepared based on merit in skill test and .
The skill test will be held in the font of Hindi Kruti Dev 10.

The candidates must have filled the application form in English only.
filled application the candidate has to affix one passport size color photo duly attested by Gazetted Officer.
One self addressed unstamped envelope cover in the size of 10*4.5 cm to be along with .
The candidates must have the all necessary educational documents, caste certificate and typing to be with the attestation of Gazetted Officer.
On the envelope must have mentioned the words “Application for the post of Deposition Typist for Advt. No. 02/Admin. Misc.. 2016” and send to the address of “Registrar General, High Court of Jharkhand, Ranchi” through registered of speed post.